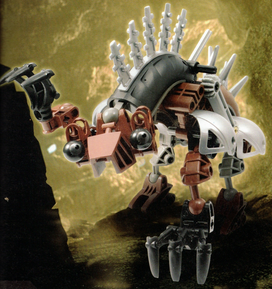 Archives moles were small, harmless Rahi which migrated from Po-Metru to the Archives. They fed on insects and protodites and were known for their ability to cooperate with each other. They later made their way to Le-Wahi on Mata Nui.1 They were the sole predator of protodites,2 which were their preferred prey.3

Archives moles were small Rahi which originally dwelled in Po-Metru. When the number of assemblers' villages increased, they were forced to migrate. The majority moved to the Archives, living in its shadowy corners and feeding on insects and protodites.4

The Rahaga considered Archives moles to be the best of all Rahi at working together. Since they were small and relatively defenseless against large predators, cooperation was the only thing that allowed them to survive. They had been known to form living ladders to reach high places or living bridges to cross chasms beneath the sub-levels.4

The Archives moles responded to the Visorak invasion by running and hiding. They could squeeze into places far too narrow for Visorak and could remain there, frozen in fear, until the Visorak left in frustration. Sometimes the Visorak spun webs and blocked the openings of those spaces, trapping the Archives moles inside. Bomonga made a point of keeping an eye out for what looked like stray webbing down below, freeing trapped Archives moles and coaxing them, with difficulty, out of their hiding places.4