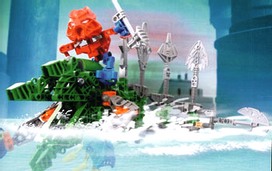 Razor whales were massive aquatic mammals which relied on sharp spines on their backs to protect them from predators. At a certain point in their lives, their spines naturally fell off, making it possible for Matoran to ride them.1

Razor whales were massive creatures which lived in the sea off of Ga-Metru. They fed on other marine life. Although their appearance was formidable, they were not hostile by nature. The incredibly sharp spines on their backs were enough to scare off most predators – even Matoran fishing boats left them in peace. Because they rarely needed to fight, razor whales enjoyed a peaceful existence. At a certain point in their lives, razor whales' spines fell off. It was not known if this was related to age or some other factor. Once their spines were gone, it seemed to become easier to tame them, and some Matoran, like Maku, were even able to ride them.2

During the Visorak invasion in Metru Nui, Toa Hordika Nokama fought hard to protect this species from the Visorak Boggarak, although it was a losing battle. Since they were not accustomed to having enemies, the razor whales seemed not to understand the need to hide or flee. Nevertheless, Nokama kept trying to save them and took the loss of each razor whale very personally. Rahaga Gaaki remarked that their gentle nature was working against them and that the survival of the species was at risk.2

As a Toa Hordika, Nokama made a point of defending razor whales against the Visorak Boggarak.1

Few specimens were ever sighted off Mata Nui. It was unclear how many of the species survived.1

Razor whales were among the strongest Rahi.3