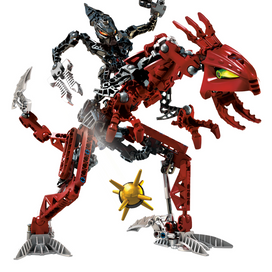 Rock steeds were reptilian beasts with sharp jaws and stinger tails found in the Bara Magna wasteland. They were good to stay away from. Nevertheless, bone hunters and sometimes Skrall often used them as mounts, due to their toughness, loyalty to their rider, and fierce combat skills. Rock steeds had enhanced senses of vision, hearing, and smell, making them able to detect enemies from miles away.1

Rock steeds were fierce animals, with sharp jaws and stinger tails. They were incredibly dangerous in battle, could travel long distances with no water, and were very loyal to their owner. Rock steeds had very sharp vision, hearing, and sense of smell, so they could detect the presence of an enemy from miles away.2

Though not as fierce in battle as the rock steeds of the bone hunters, sand stalkers had greater endurance than rock steeds and were easier to tame.3

The rock steed was one of the most dangerous creatures in all of Bara Magna. It had the appearance of a giant lizard. It stood on two legs and had two small arms. It had fierce jaws and a stinger tail like a scorpion. If one got too close, it would bite or sting, but if one tamed it by winning a fight against it, one could ride it. When Mata Nui fought a rock steed, he noticed that it moved its right shoulder before it struck with its stinger at his right side, and moved its left shoulder when it struck at his left side. When it slapped its stinger on the ground, it tried to lunge forward and bite. The rock steed would hiss when angry.4

Skopio were the only natural predator of the rock steed, although they seemed to prefer hunting the sand stalkers Glatorian used for mounts (which were a little less able to defend themselves).5

The rock steed was a vicious, reptilian beast. Ackar told Mata Nui it had to be fought before it could be tamed.7

Although bone hunters could ride sand stalkers, they preferred rock steeds, which were better in combat.8

Rock steeds were omnivores. They were easily trained after being subdued in battle.9