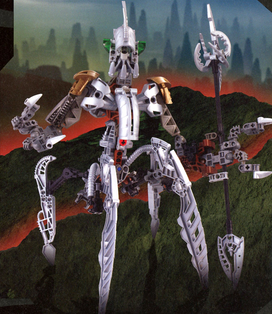 Seeker was a servant of the Brotherhood of Makuta1 and later a Dark Hunter.2 He was cast out from the Brotherhood for failing to safeguard the Avohkii. While employed by the Dark Hunters, he was dedicated to finding the Rahaga and getting the Avohkii back. His primary weapon was his staff, which physically weakened an opponent and delivered seismic shocks.1

Seeker, as he was code-named, joined the Dark Hunters in furtherance of his own goals. Seeker was originally a servant of the Brotherhood of Makuta and one of the guardians of the Mask of Light. For his failure to safeguard the mask from being stolen by the Toa Hagah (who were subsequently transformed into Rahaga), the Brotherhood of Makuta cast out Seeker. Seeker then began a personal mission of vengeance, searching for the Rahaga with the intention of retrieving the mask. Although the Shadowed One was aware of the Rahaga's whereabouts, he intentionally hid this information from Seeker so that he could not achieve his goal of vengeance and would continue to serve him loyally. Seeker continued to carry out missions for the Shadowed One, unaware that he was so close to the Rahaga. Seeker was always eager for new missions that took him to places he had not been before, hoping that on one of these journeys he would find the Rahaga. Naturally, he was never assigned tasks on Metru Nui.3

Seeker's primary weapon was his staff, which could both weaken an opponent physically and deliver seismic shocks. When done in that sequence, the earth tremor delivered an incredibly powerful blow to an already-dazed opponent.3