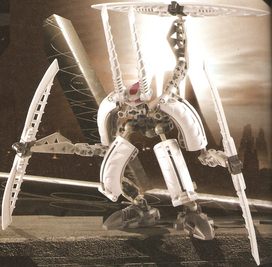 Shadow Stealer was a member of the Hand of Artakha and later a Dark Hunter.1, 2 He was able to absorb shadows and convert them into energy. He could also disappear into shadow and reappear somewhere else.2

Shadow Stealer, as he was code-named, was a most unusual being. He was a Dark Hunter who hated other Dark Hunters. Legends about him abounded, but facts were in short supply. The Shadowed One considered him useful, eliminating the less efficient members of his organization. He thought of him as a plague, striking the weak and making the strong even stronger. Shadow Stealer was ancient, perhaps even older than the Shadowed One. It was rumored that he was a hero long before the first Toa ever appeared in the universe, possibly a hero of a completely different type. Looking for purpose, Shadow Stealer turned to the Dark Hunters. The Shadowed One initially sent Shadow Stealer to the farthest reaches of the universe on a mission that should have taken years to complete. He finished the task in days and then started working his way back to Odina ever since, defeating Toa and Dark Hunters as he went. The Shadowed One expected that he would eventually come back to his very gate for a final confrontation.3

Shadow Stealer was able to absorb the shadows that surrounded him and convert them into energy. He could slip into shadow and re-emerge in a place of his choosing, provided there was a shadow there for him to enter and exit. The Shadowed One supposed that there was limit to the range of this ability, since he took so long to return. Shadow Stealer's powers made him uniquely well suited to battle the Brotherhood of Makuta. The Shadowed One heard a rumor that the Brotherhood actually attempted to hire another Dark Hunter to eliminate him.3

Most Hand of Artakha members went on to become Order of Mata Nui members. Shadow Stealer's bitterness was the exception rather than the rule.4

Shadow Stealer missed the sense of belonging, the authority, and the power he had as a Hand of Artakha member.5