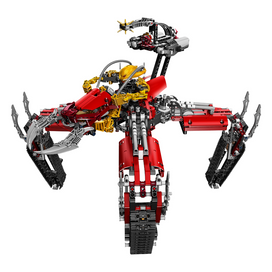 The Skopio XV1 was a massive battle vehicle modeled after the real Skopio creature that stalked Bara Magna. Incredibly powerful and heavily armored, the Skopio XV1 was considered to be virtually unstoppable. A masterpiece of engineering, the Skopio XV1 was built using parts from other damaged vehicles, along with scrap from wrecked shelters. Telluris had added to it over the years until it became the colossus it was as of story year 2009. Kept hidden underground most of the time, it burst out of the ground and attacked whenever Telluris felt threatened. It was rare that his target survived to "threaten" him again. The Skopio's combat style followed a set pattern. First, Telluris had it smash its way up through rock and sand. The appearance of the vehicle was usually preceded by earth tremors, in the same way they heralded the arrival of a real Skopio. If the target tried to flee, Telluris used the force blasters or Thornax launcher to block its escape. The battle was finished using the working pincers on the Skopio. Berix believed that the only truly vulnerable spot on the Skopio XV1 was the pilot's post, where the controls for the machine were located. As of story year 2009, no one had been able to make it past the weaponry of the vehicle to test his theory. The Skopio XV1 was the largest land vehicle in all of Bara Magna. Like the creature it was named for, it was capable of moving underground, allowing it to stay hidden until Telluris was ready to strike. The retractable treads of the Skopio XV1 allowed it to roll through the desert or walk on four legs. When riding on the treads, the vehicle was capable of surprising speed for something so large. The XV1 was armed with modified force blasters, a Thornax launcher, and moving pincers that could seize and crush enemy vehicles.1

Believing that the villages intended to kill him and take his designs and equipment, Telluris threw himself into building a vehicle so powerful that no one could defeat it. The result was the Skopio XV1, born of a combination of genius and madness.4