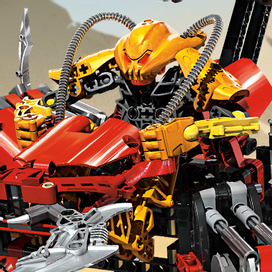 Telluris was a member of the same tribe as Sahmad. He was a deranged but brilliant warrior. Were he a more rational and practical being, he probably would have conquered much of Bara Magna by story year 2009 with his Skopio XV1 vehicle. However, his insanity limited the harm he had done, and fortunately for the Agori, the appearances of Telluris and his awesome machine were rare. Prior to the Core War, Telluris had managed to find a sort of acceptance among those Agori who liked tinkering with machines. Berix was one of the first to try to make friends with Telluris, and he still credited Telluris with some of the techniques he knew for repairing gadgets as of story year 2009. At first, Telluris welcomed the attention after so many years. However, he later became convinced that the other Agori were out to steal his ideas, and he drove them away. Believing that the villages intended to kill him and take his designs and equipment, Telluris threw himself into building a vehicle so powerful that no one could defeat it. The result was the Skopio XV1, born of a combination of genius and madness.1