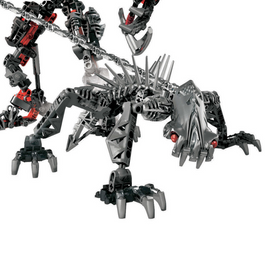 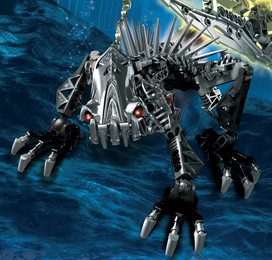 Spinax's enhanced tracking sense granted him a boost of +10 to the Mind stat.1

Spinax was the Rahi companion of Maxilos. Spinax was the equivalent of a bloodhound, capable of tracking a target anywhere and maintaining pursuit over the course of centuries. His primary weapons were claws and teeth.3

Spinax, Maxilos's pet, could track an escaped prisoner across a planet by following his unique energy trail. Spinax never grew tired and would stay on the hunt until his quarry was captured. Spinax's natural tools were claws, teeth, and an enhanced tracking sense. Spinax was the ultimate energy hound – he could track anyone, anywhere, and never tired of the chase.1

Spinax could track a mote of dust across the universe.4

Spinax tracked beings by their energy.5