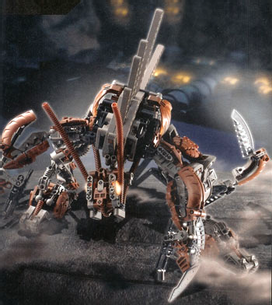 The spiny stone ape was a tremendously strong Rahi which lived in the caves of Po-Metru and Po-Wahi. It was aggressive only when threatened. It relied on its claws, blade-tipped tail, and spiny armor when fighting. Its normal reaction to an intruder was to roll up into a defensive ball and growl, warning away anyone foolish enough to enter its lair. They favored the caves carved out of the canyon walls by rock raptors.1

Small bands of spiny stone apes could be found hiding among the towering protodermis structures deep in the wilds of Po-Metru. Their mottled brown and gray hide helped them blend in easily with the rocky environment, and their powerful arms and legs allowed them to climb vertical surfaces quickly. Their sharp climbing claws allowed them to cross slippery surfaces safely. Their blade-tipped prehensile tail could be used for balance or as an extra limb for climbing. Spiny stone apes were not especially hostile, but they could be very aggressive when their territory was invaded. Then threatened, they curled into a defensive ball, using their sharp foreclaws, bladed tail, and spiky hide to keep attackers at bay. They warned that they might attack with a guttural hissing. When Po-Matoran heard this sound, they always knew to back away slowly. Spiny stone apes had a sort of symbiotic relationship with the rock raptors also living in Po-Metru. While they were seldom found living together, the spiny stone apes often used the abandoned caves and tunnels which the rock raptors carved out of the canyon walls. The rock raptors seemed to tolerate this behavior, perhaps because of the spiny stone apes' considerable ability to defend those places.2

Rahaga Iruini remarked that the Po-Matoran were very fortunate that the spiny stone ape was not overtly aggressive. Spiny stone apes possessed tremendous strength, and they could easily list ten times their own weight. Their raw power combined with their sharp claws, sword-like tail, and extremely resilient armor made them a threat even to the Visorak.2