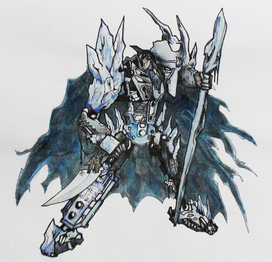 Surel was a wounded ice warrior who lived in the White Quartz Mountains north of the village of Iconox. He was served by dangerous, bio-mechanical iron wolves.1

After the ice tribe migrated south during the Core War, during a major battle, Gelu's best friend, Surel, was badly wounded and believed to be dead. Although Gelu searched for him, he never learned that Surel had in fact survived.2