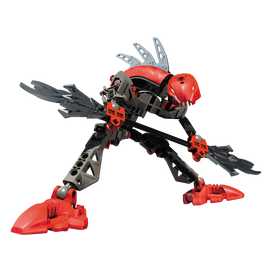 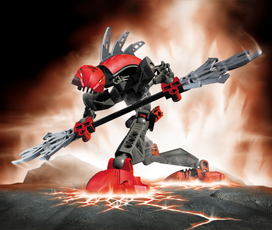 Turahk was one of the six Rahkshi dispatched by Makuta to capture the Herald of the Seventh Toa. Turahk's job was to fill the Toa Nuva with fear so that they would forget their duty to Mata Nui. Using its staff, it could cause a foe to break into a terror-filled run or to freeze in fear.1

Turahk used its Staff of Power to create feelings of fear in his opponents, making them freeze in place or run away in panic. Turahk was a master of stealth and seemed to appear and disappear at will.2

Turahk's color was red, and his type was fear. His Staff of Power created terror in opponents, making them run away or freezing them in fear. Turahk relied on shadows and surprise. Makuta wanted Turahk to make the Toa Nuva so afraid that they would forget their duty to Mata Nui.4

Turahk was the Rahkshi of Fear, and its Staff of Fear could make any target either run in panic or remain frozen with sheer terror.6