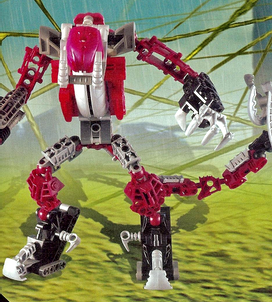 Tyrant was a Dark Hunter3 who made a failed attempt to overthrow the Shadowed One. He was later set up for defeat by Toa and vanished beneath the waves, although rumors persisted that he was still alive. Tyrant was capable of absorbing heat and releasing it in a massive blast. He was immune to the effects of extreme heat or cold.4

Tyrant, as he was code-named, was originally the brutal ruler of a small island to the south [of Odina]. His subjects lived in mortal fear of him; his favorite hobby was to design new and better ways to perform executions. Tyrant was the only real challenge to the Shadowed One's rule before the Piraka's rebellion. He agreed to ally with the Dark Hunters during the Toa-Dark Hunter War, although the Shadowed One supposed that he never considered himself a member. He spent most of the conflict trying to undermine the Shadowed One's authority and take control for himself.5

Before vanishing, Tyrant supposedly vowed vengeance on the Shadowed One and the Toa. Although it was possible that he might return one day to keep that vow, the Shadowed One did not take his threat very seriously.5

Tyrant had the ability to absorb heat, causing his body to reach dangerously high temperatures and giving his armor a fiery red color. He could release a massive heat blast and use superheated air to levitate. He was impervious to both extreme heat and extreme cold.5

No one ever saw Tyrant after his disappearance in the silver sea, nor did anyone miss him.5

Tyrant's subjects were members of his own species.6