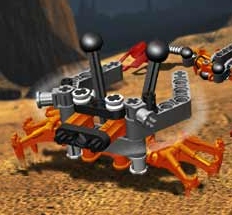 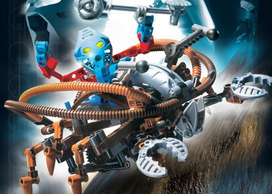 Ussal were crab-like creatures long domesticated by Matoran and used for both racing and transport. Docile and friendly, Ussal seemed genuinely to enjoy Matoran company. On Metru Nui, they were used to pull carts and carry heavy loads. On Mata Nui, they served much the same purposes, along with being used for sport in Ussal crab races and for defense.1

Ussal pens could be found all over Le-Metru. The carts they pulled transported goods too large or fragile for the chutes or carried Matoran who preferred to travel a little more slowly. The large crabs were specially trained to obey the commands of their riders, although they were known to get temperamental at times. Ussal crabs smelled somewhat unpleasant, and Ussal crab pens gave off a noticeable stench.2

Shoveling out Ussal crab stalls was known to be unpleasant.3

Ussal crabs were commonly found on the shores of Ga-Metru and hauling carts in the streets of Le-Metru. The docile Ussal crab was one of the friendliest Rahi in all of Metru Nui. No one knew for sure when Ussal crabs were first seen in the city, but they were unquestionably important. Ussal crabs genuinely seemed to enjoy Matoran company and were easy to tame for use as a beast of burden. Their gentle personality and large numbers made them a staple of Matoran society, commonly used to carry cargo, serve as mounts, or help Matoran construction and digging crews. Onu-Matoran seemed particularly fond of Ussal crabs. They were a common sight in the Great Archives, where they helped their masters move stasis tubes and other heavy objects. Despite their ungainly appearance, Ussal crabs could move with great, clattering speed when they wished to. This made Ussal crab racing a popular sport among Matoran in Metru Nui.5

Rahaga Gaaki remarked that the Ussal crab was one of the few wild creatures she had ever seen truly befriend Matoran.5

Ussal crabs were one of the many Rahi created by the Brotherhood of Makuta and were helpful to Matoran.6

Ussal crabs changed form as they grew older, as Pewku did.7 This was not unique to Ussal.8 There were still small Ussal after Pewku grew larger.9 The growing process was gradual.10