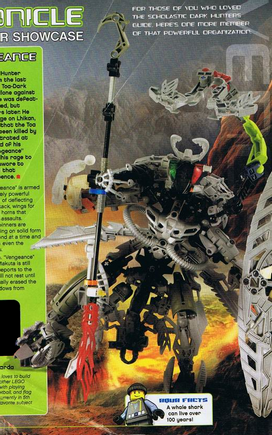 Vengeance was a Dark Hunter who fought in the last battle of the Toa-Dark Hunter war, alone against Toa Lhikan. He was defeated and trapped, but he escaped years later. He sought revenge on Lhikan, only to learn that the Toa had already been killed by Makuta. Frustrated at being cheated of his revenge, "Vengeance" transferred his rage to Makuta and swore to end his life someday. Vengeance was armed with an extremely powerful shield capable of deflecting virtually any attack, wings for flight, and twin horns that deflected mental assaults. His Rhotuka spinners were capable of taking on solid form for a split second at a time and slicing through even the hardest metals. As of early story year 2007, Vengeance was active and was convinced that Makuta was still alive, despite reports to the contrary. He would not rest until he had personally killed the master of shadows.1