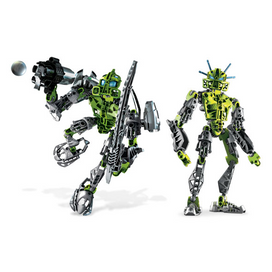 Adaptive armor was a high-tech set of armor equipped by each of the Toa Nuva that automatically transformed and adapted to its user's surroundings. Each set of adaptive armor included weapons and a Kanohi Nuva mask that could change shape with the rest of the armor. Artakha gave the adaptive armor to the Toa Nuva in preparation for their conflict against the Brotherhood of Makuta in Karda Nui, describing it as "perhaps [his] greatest creation." When the Toa Nuva entered the skies of Karda Nui, their adaptive armor developed propulsion systems that allowed them to fly. The armor also developed projectile weapons – Midak skyblasters for those Toa that stayed in the skies of Karda Nui, and Nynrah Ghost blasters for those that descended to the swamp.

The Toa Nuva's new adaptive armor adapted to any environment, making them ready for battle wherever they went. In the swamp of Karda Nui, its flying jets kept the Toa safely in the air above its terrible waters. The Toa's weapons adapted to be Nynrah ghost blasters, capable of firing a burst of energy which could then be shaped and controlled by the mind of the Toa into any form. Like their armor, the Toa Nuva's masks also adapted to combat in the swamp, becoming more streamlined for flight.2

Adaptive armor changed very quickly. It used sensors to detect what environment it needed to adapt to.3

Adaptive weapons would continue to adapt if used by a Makuta.4