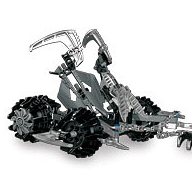 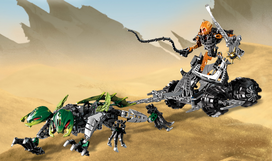 The Baranus wagon was built during the Core War by rock Agori and used to transport weapons and supplies to the front lines of battle. Being unarmed, many of the wagons did not make it back in one piece. Most of the ones that survived in the Bara Magna region were destroyed by the baterra during their battles with the Skrall legions. Sahmad's was one of the few still in use in the desert. These wagons were originally not intended to be pulled by the unpredictable Spikit. They were built to be used with sand stalkers, which were much faster than Spikit. However, as time passed, the more powerful creatures were chosen to replace the sand stalkers, as the Spikit's fierce nature made it an excellent means of defense. Sahmad's Spikit was experienced at battling rock steeds, making it of great use during his battles with bone hunters. The Baranus was large enough to carry only a driver. In the past, cargo sleds were attached to the back to carry supplies. Sahmad occasionally used these to haul captured Agori back to his hidden base. Although heavily armored, the Baranus V7 had the distinction of being virtually weaponless, a unique situation on Bara Magna. It did have mounted blades but did not carry a Thornax launcher.1

Baranus battle wagons were in use during the Core War.2