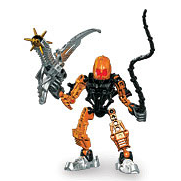 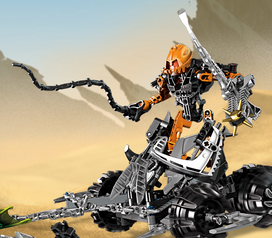 Sahmad was an Agori spoken of with dread in every village of Bara Magna. He was not a member of one of the six tribes present in the desert, but rather of a "lost tribe" from the time before the Shattering. The survivors of the plague which wiped out virtually the entire tribe were ostracized from the other Agori villages, forcing them to make new lives in the wilderness. As a result, they nursed a terrible hatred of all other Agori. In the case of Sahmad, he salvaged a Baranus battle wagon left over from the Core War and became a desert bandit. He did this for many millennia, until the coming of the Skrall. Since Sahmad operated mainly in the northern regions which had been claimed as Skrall territory, he needed to move or find a new line of work. He chose to give up being a thief and become a slaver, capturing Agori in the desert and selling them to the Skrall. Now and then, for fun, he would ride into a village and challenge a Glatorian in the arena – if the Glatorian won, the village would get his latest captives back. Sahmad was armed with a whip and a Thornax launcher. He preferred to fight up close, using his whip to entangle opponents and the threat of his launcher to make them surrender. Sahmad was normally found between the Black Spike Mountains and the Vulcanus region. Exactly where in the desert he lived remained unknown, although some believed he found shelter in Roxtus. One of Sahmad's most bitter enemies was Fero. Since both he and the bone hunters captured Agori in the desert, Sahmad had had a number of clashes with the roving bandits. The village of Iconox had a reward for 100 pounds of exsidian for the capture of Sahmad. Strakk made an attempt to earn it but was not able to track the Agori down.1 Sahmad's Spikit was experienced at battling rock steeds, making it of great use during his battles with bone hunters. Sahmad occasionally used cargo sleds attached to the back of his Baranus V7 to haul captured Agori back to his hidden base.2