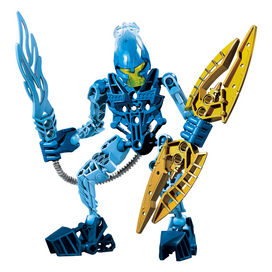 Berix was a member of the Water tribe and was a resident of Tajun before its fall. A skilled scavenger, Berix spent much of his time in the wastelands, searching through ruins for scrap he could use to modify or repair something else. Unfortunately, his frequent disappearances and vast collection of items (some valuable, some not) led many in Tajun to believe he was a thief. Kiina, Second Glatorian for the village, was particularly hostile to Berix. This was made worse when Berix discovered a hidden cavern near the village which had previously been a secret refuge for Kiina. Berix had a unique set of skills. In addition to knowing how to patch and repair weapons, armor, and vehicles, he had also picked up a knowledge of herbal healing from friends in Tesara. Despite all this, Berix had long felt unappreciated. While Agori and Glatorian would come to him for repairs, no one really treated him like a valuable member of the community. As a result, Berix could be very defensive and sensitive about his activities. "I'm not a thief," he insisted, "I'm a collector." Berix carried a water sword and shield. Although he had occasionally dreamed of fighting alongside Tarix in the arena, he knew he did not have what it took to be a Glatorian. Still, he was more likely to rush into a fight than away from one.2

Berix was an Agori villager in the settlement of Tajun. He was a collector, scouring the desert and its ruins for "treasures": scrap metal, old armor and weapons, or whatever he might come across.3

Berix was an expert at salvaging ruined equipment and patching it back together. He used his water sword and shield to defend himself against Zesk hiding in the desert sands.4

Berix was of the Water Tribe and was located in Tajun. His equipment was a water sword and a shield.1

Berix was a member of the Water tribe and was a resident of Tajun before its fall. His hobby was scavenging among the ruins, searching for old equipment or scrap he could repair or modify. Unfortunately, his habit of disappearing at times and then appearing with a bunch of new items led people to think he might be a thief. "I'm not a thief," he would always insist. "I'm a collector."1

Sometimes, Berix's yen for collecting got him into trouble.1

In terms of the personality, Berix was eager, curious, and adventurous. Berix was also pretty sensitive to the criticisms of others. For a long time, he had hurt feelings because people believed he was a thief. Despite that, he still did repairs when they asked him to. Lately as of the end of story year 2009, his friendship with Mata Nui had made him feel better about himself, and even Kiina was being a little nicer to him.1

Berix was initially believed to be the traitor by Kiina, for which she later apologized.1

Berix formed a close friendship with an Agori from Tesara, Tarduk, since both liked to search through ruins for ancient items.1, 5

Prior to the Core War, Berix was one of the first Agori to try to make friends with Telluris, and he still credited Telluris with some of the techniques he knew for repairing gadgets as of story year 2009.6 Berix believed that the only truly vulnerable spot on the Skopio XV1 was the pilot's post, where the controls for the machine were located. As of story year 2009, no one had been able to make it past the weaponry of the vehicle to test his theory.7

Berix's gold-colored weapons were most likely found in ruins near Tajun.8