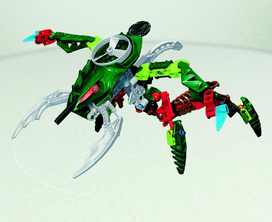 The chute lurker was a dangerous Rahi breed known for hiding in transport chutes and ambushing travelers. It was omnivorous and amphibious, although it seemed to avoid breathing air as much as possible.1

One of the most dangerous creatures in Metru Nui, Chute Lurkers were fortunately quite rare. Chute lurkers hunted by locking themselves into place in a Metru Nui transport tunnel with their arms, then waiting for objects, other Rahi, and even Matoran to come speeding towards them. Once caught by a chute lurker, there was rarely any escape unless aided by a Matoran or a Vahki.2

Chute lurkers were one of the most dangerous creatures in Metru Nui and were found city-wide, although fortunately they were quite rare. They were omnivorous and were capable of breathing liquid protodermis. They were known for stalking prey in the interior of transportation chutes. Although they could breathe air as well, they avoided being outside of chutes more than they needed to be. Chute lurkers hunted by locking themselves in place inside a chute with their arms, waiting for objects, Rahi, or even Matoran to come speeding by. Once something was caught by a chute lurker, there was rarely any escape unless aided by another Matoran or a Vahki. Chute lurkers tended to wait near sharp curves and other areas where a traveler would be less likely to spot them ahead of time.3

With much of the chute system damaged after the Great Cataclysm, chute lurkers were forced to find other hunting grounds. This made them targets for the Visorak and seemed to put the fate of the species in jeopardy. Norik encountered a number of these creatures and noted that they seemed lost and confused.3