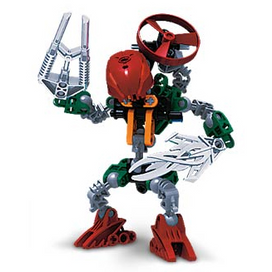 Colony drones were harmless Rahi whose Rhotuka spinners were a food source for the Visorak. The Visorak hordes brought large groups of colony drones with them on their expeditions to new lands, keeping them penned up and under guard.1

These generally harmless creatures served an important role in the Visorak world. The various species of Visorak fed off the energy of the colony drone spinners, making them essential to the survival of the horde. The Visorak brought large groups of drones with them when traveling to a new land, keeping them penned up under guard for use as needed.2

Colony drones were harmless Rahi which played an important role to the Visorak hordes. The various species of Visorak fed off of the energy of colony drones' Rhotuka spinners, making them essential to the survival of the horde. The Visorak brought large numbers of colony drones with them when they traveled to a new land, keeping them captive until they needed them.3

The colony drones appeared to show no sign of distress. This could have been because they were simply too dim to realize they were being used or because they had been intimidated by the Visorak for so long that they knew no other way of life.3

During the Visorak invasion in Metru Nui, colony drones were kept in pens in the Coliseum.3