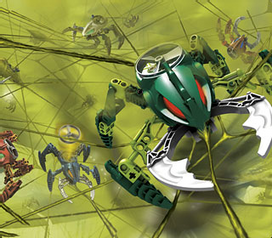 Visorak were spiderlike creatures which operated as a horde under the command of Sidorak and Roodaka. Little was known about their point of origin. An ancient tablet in the Archives stated that their name meant "poisonous scourge" in their own language. They were also known as the "stealers of life." The Visorak were well organized, cunning, efficient, and highly skilled hunters. They had been active in a number of different places before coming to Metru Nui and had driven herds of Rahi before them.1

Sea Spiders were the only known natural predator of the Visorak. While not large enough to pose a threat to a Visorak one-on-one, the front legs of a sea spider were able to inject venom that shrank its foe down to a more manageable size.2

Colony drones served an important role in the Visorak world. The various species of Visorak fed off the energy of the colony drone spinners, making them essential to the survival of the horde. The Visorak brought large groups of drones with them when traveling to a new land, keeping them penned up under guard for use as needed.2

Visorak hunted anything that lived, wrapping Rahi up in web cocoons and often using venom to mutate the Rahi into even more monstrous creatures.4

The various species of Visorak fed off of the energy of colony drones' Rhotuka spinners, making them essential to the survival of the horde. The Visorak brought large numbers of colony drones with them when they traveled to a new land, keeping them captive until they needed them.5

Sea spiders were a natural enemy of the Visorak, and a large number of them followed them from place to place.7

Of all the Rahi in Metru Nui, silver chute spiders were the only Rahi which the Visorak ignored. Rahaga Norik guessed that perhaps they sensed a sort of kinship with the creatures.8

The Visorak had four natural tools: webbing, pincers, venom, and Rhotuka spinners. Visorak produced webbing from internal glands and spun it using their mouths. It was strong enough to support a large number of Visorak as they moved from place to place. It could also be used to form a thick cocoon strong enough to hold the most powerful Rahi. All Visorak had strong, sharp pincers that could inflict a painful bite. Visorak venom was mutagenic, capable of transforming Rahi or other beings into horrifying versions of their former selves. The most common delivery system was barbs in the cocoons. They used this to cause mutations among Rahi. The only known cure for the effects of Visorak venom was the counteragent abilities of Keetongu.1

Visorak had natural Rhotuka launchers as part of their bodies,9 able to generate wheels of energy by willpower.1, 10 Their Rhotuka were their primary offensive and defensive tools.10 All Visorak had a default spinner power which could stun and paralyze an opponent, in addition to their other powers.1

Visorak were intelligent creatures, although they were unable to understand or to speak the Matoran language, with the exception of the Oohnorak. Their relationship with Sidorak was simple and straightforward: they gave him their loyalty in return for his providing them with constant opportunities to hunt.1

"M&D" was Visorak shorthand for "mutation and disposal."11

Each Visorak horde traveled with a small group of venom flyers for capturing flying Rahi, which could be extremely difficult for the largely land-bound Visorak to capture.12

Visorak were the primary Rahi found on Destral. Visorak were spider-like creatures known for their cunning, high level of organization, and ruthless efficiency. They were the backbone of the Brotherhood of Makuta's legions for millennia, a destructive and overwhelming force. Like other Rahi spiders, Visorak could create webs and had powerful pincers. Their most devastating weapon was their venom, which could mutate a victim into a more bestial form of itself. The Visorak served the Brotherhood simply because the Brotherhood guaranteed them the opportunity to hunt and destroy, which was all that they lived for.13

Visorak were always very confident in their attacks, accustomed to taking down even large Rahi.14

Visorak could not really be tamed. They operated out of their own self-interest. They followed the Makuta because the Makuta let them do what they did best: conquer places.15

The Visorak were brought into being on the island named Visorak.16

The Visorak never revolted against Sidorak and Roodaka because the two of them always brought them to new places to conquer.20

Visorak only mutated what they were ordered to. Otherwise, they simply wrapped everything in webs and left any beings trapped inside in stasis.23

Though observers often exaggerated their numbers, Visorak probably numbered in the hundreds.24

There were likely 750-900 Visorak when they arrived on Metru Nui.25

The Visorak had never been led by anyone for a prolonged period of time before Sidorak and Roodaka led the horde.26

Visorak were created for the purpose of conquest.27

Visorak made their webs in the same manner as real spiders.29

It's possible that some Visorak were left behind on conquered islands to maintain the cocoons keeping Rahi in stasis.31

Visorak likely left a token force behind on islands they conquered.32

There was no inherent conflict between Kahgarak and Visorak.33

Sidorak and Roodaka had to travel everywhere with the Visorak when they led the horde.35

The Visorak signaled each other through patterns of vibrations in their webs, not through spoken language. They could speak, but were not conversational.38

Visorak wanted two things: a leader and the chance to conquer. The Brotherhood of Makuta gave them both.39

Visorak had a scent that other Visorak could use to distinguish a real member of their species from an imitation, such as a shapeshifted Krahka.40

Other Rahi had an instinctive fear of Visorak.41