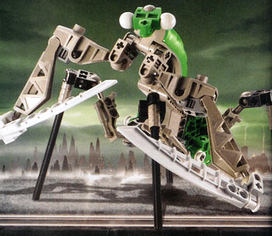 Metru mantises were nocturnal, meat-eating, insect-like Rahi found on both Metru Nui and Mata Nui. Their favorite prey was Nui-Rama, Nui-Jaga, and other insectoids. They averaged six to eight feet in height and tended to be tame unless provoked. After the arrival of the Visorak in Metru Nui, Metru mantises began feasting on them as well, and the Rahaga considered them a potent strike force against the invaders. They hunted by grabbing their prey with their forelegs and then injecting a sedating venom through their bite.1

Metru mantises were quite large, averaging six to eight feet in height. However, they did not live up to their frightening appearance. They could be found in virtually all six metru in Metru Nui, commonly staying on the outskirts and moving into the more populated areas only in search of food. Metru mantises were nocturnal meat-eaters. Their favorite prey were Nui-Rama, Nui-Jaga, and other Metru mantises. They were relatively tame unless provoked. Metru mantises were never known to attack Matoran, although they would defend themselves if threatened. Onu-Matoran at times set Metru mantises free in mines and tunnels to clear out fireflyers and other insects. Metru mantises were extremely fast, and they could catch prey between their strong forelegs and bite it with their mandibles. Their venom acted as a sedative, rapidly taking the fight out of a foe.2

When the Visorak invaded Metru Nui, Metru mantises started preying on them too. Visorak hated them. This prompted Sidorak to assign two Kahgarak of hunting down and capturing every Metru mantis in the city. Norik and Bomonga made a special effort to capture Metru mantises and keep them safe in the Archives, hoping to unleash them as a strike force against the Visorak hordes at the right moment.2