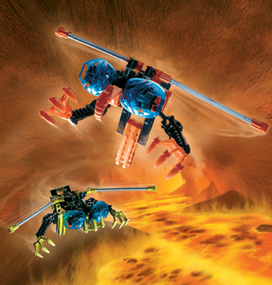 Nui-Rama were flying, winged insect-like Rahi. They menaced both Le-Metru and Le-Wahi. Their primary tool was their stinger, which could be used both for offense and for feeding. Nui-Rama fed on liquid protodermis in Metru Nui and on plant sap and other natural fluids on Mata Nui. Their wings were strong enough to allow them to carry a Toa into the air. They were fast enough to outdistance their natural enemy, the Gukko bird. Nui-Rama were among the earliest recorded Rahi menaces in Metru Nui and followed the Matoran migration to Mata Nui. On Mata Nui, Makuta fitted large numbers of them with infected masks and set them against the Matoran villages.1

Nui-Rama were fast, powerful insects that came from out of the sky, bringing destruction.2

Lurking beneath the molten surface of the lava flow of Ta-Wahi, a hungry Ranama would wait for an unwary Nui-Rama to fly past, then leap forth with an enormous fiery splash to ensnare the insect with its long and sticky tongue.3

Nui-Rama were insect-like creatures capable of flight, powerful enough to lift a Toa high into the air. In battle, they used their speed, stealth, and stinger. Their region was Le-Wahi.4

In Le-Metru, the Vahki constantly needed to prevent Nui-Rama from making nests on the rooftops. Nui-Rama would be netted and shipped off to the Archives. Nui-Rama nests were a sign that Vahki had not patrolled an area recently.5

Nui-Rama were one of the preferred prey of Metru mantises.6

Nui-Rama were insectoid Rahi. When they attacked, their harsh buzz would fill the air, and their dark shapes would appear in the sky.7

Nui-Rama were one of the earliest recorded Rahi menaces in Metru Nui. The Vahki spent centuries trying to root them all out of their Le-Metru nests. Nui-Rama fed on liquid protodermis, and Matoran believed they were particularly attracted to the impurities in it. Drawing it directly from the sea made the Nui-Rama vulnerable to sea creatures, so they preferred to drink from the chutes. Using their stingers to pierce the magnetic field around a chute, they would drain large amounts of liquid protodermis from the inside. If they returned often enough to the same spot, the field could be ruined, causing the chute to collapse. Nui-Rama used their stingers both for feeding and as an offensive tool. They were most dangerous when their nest was disturbed. A Nui-Rama's wings were strong enough to allow it to lift a Toa high into the air. The Nui-Rama's natural enemy was the Gukko bird.7

Rahaga Kualus remarked that Nui-Rama were nasty creatures and warned that angering a swarm was very dangerous. If threatened, he recommended heading inside immediately, or else heading to Ko-Metru, since intense cold slowed Nui-Rama down. To capture Nui-Rama, he recommended using something to entangle them such as webs or nets, as the Visorak did.7

Nui-Kopen were bitter enemies of Nui-Rama, since they both hunted the same prey.8, 9

A Nui-Rama was known to have been in the Archives.10

During the Toa-Dark Hunter war, Lariska sent a message to the Shadowed One via trained Nui-Rama.11

Miserix once remarked, "A Nui-Rama doesn't buzz on the Tren Krom Peninsula without you scum hearing it."12