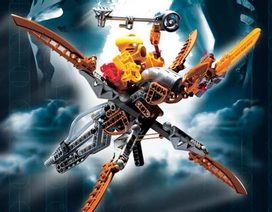 Gukko were a breed of large, four-winged bird Rahi. They originally made their nests in the cables above Le-Metru.1 The Gukko migrated to Mata Nui after the Matoran and found a home in the jungles of Le-Wahi.1, 2 Matoran eventually learned to tame Gukko birds. Gukko riders became the main defense force of Le-Koro. Rahaga Kualus insisted that Gukko was not the correct name for the species and might have even been an insult in their language. Kualus and Toa Hordika Nuju were believed to have been the first to ride Gukko birds.1

Gukko were known to squabble over berries.3

Gukko were large birds which roosted in the tangle of cables above Le-Metru.4

Gukko were graceful, peaceful, and beautiful creatures. They had a long, graceful body and four slender wings. Gukko were a common sight in the skies over Le-Metru. They favored nesting in the tangled cables of that busy section of the city. They tended to stay in small flocks as they looked for wind currents and updrafts to help prolong their flying. They preferred to spend most of the day gliding and soaring, helping them keep an eye out for predators. Gukko were very swift, which had the unfortunate side effect of attracting the speed-crazed phase dragons even more. Despite their seemingly docile nature, they proved extremely difficult to tame in Metru Nui. Many Le-Matoran tried to ride a Gukko bird only to be thrown off quickly. Kualus noted that although Gukko were peaceful, they would fight bravely when Nui-Rama threatened their nests.6

Kualus remarked that when the Toa Metru brought the Matoran to live on the island of Mata Nui, they would be fortunate to have Gukko along with them to tame and defend their homes.6

Silver chute spiders particularly preferred to prey on Gukko. The birds would fly into the spider's web and become ensnared. Fast-acting venom contained in the web paralyzed the prey, at which point there was no hope of escape, unless a passing Matoran spotted the trouble and worked to free the bird before the spider arrived.8

Gukko were distantly related to the Taku.9

Kahu and Kewa weren't necessarily Gukko birds at different parts of their life cycle, they were possibly different breeds of Gukko.12