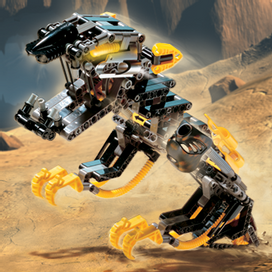 Muaka were powerful tiger-like Rahi which menaced Metru Nui and Mata Nui. They were solitary hunters, extremely quick for their size and more than strong enough to bring down most other Rahi. Muaka were particularly fond of Rahkshi and were their only natural enemy on Metru Nui. They relied primarily on their claws when on the hunt, sinking them into their prey, forcing them to the ground, and then finishing the job with their teeth.1

Muaka, with its deadly jaws, and Kane-Ra, with its sharp horns, together were a threat to the inhabitants of Mata Nui.2

The largest and fiercest predator in Ko-Wahi, the great cat saw anything that moved as prey. Saliva could be seen dripping from its jaws.4

The Muaka was a great cat whose powerful claws could shred solid protodermis.4

A Muaka was kept in a Muaka pen in the lowest levels of the Archives. Food was sent down to it once a day from the upper levels through a small chute, but Muaka were notorious for always being hungry. Muaka did not get along with Rahkshi at all. Rahkshi were usually able to beat Muaka easily, unless trapped in close quarters.5

The great Muaka cat could stretch its neck to lunge at prey.6

Muaka were willing to prey on Kane-Ra, but the Kane-Ra's sharp horns made it a risky creature to challenge.7

Muaka were powerful tiger-like Rahi. They were nocturnal hunters. They were solitary hunters, extremely quick for their size, and were able to bring down almost any other Rahi. The relied primarily on their claws when hunting. They would sink them into their prey, then finish the job with their teeth. A Muaka would then carry its kill off to a nearby lair.8

On Metru Nui, Muaka were particularly fond of Rahkshi, which they considered a delicacy. A single Muaka could decimate an underground Rahkshi colony in a matter of days. Muaka did not seem to have a taste for Matoran, but their ferocious and unpredictable temper made them a constant danger to anyone around. Efforts to capture and train Muaka failed horribly.8

On Metru Nui, Muaka were found in Ko-Metru. They would spend days asleep in unused portions of the Archives and then emerged to prowl Ko-Metru at night. Scholars working after hours in the knowledge towers grew accustomed to hearing the growls of Muaka echoing through the district.8

Rahaga Pouks advised against trying to hunt Muaka, warning that a Muaka was more likely to stalk its pursuer successfully than the other way around. If needed, he advised baiting it with something with a Rahkshi's scent, such as a Rahkshi staff. If chased by a Muaka, he recommended putting the Muaka though as much work as possible to pursue them (by running, jumping, climbing, etc.), so that perhaps it would decide to go after easier prey.8

Perhaps because they preyed on Rahkshi, Makuta made extensive use of Muaka when he used Rahi beasts to oppress the Matoran of Mata Nui.1

A Muaka was known to have been in the Archives.9

On Metru Nui, Muaka were among the predators which hunted the Husi on the rocky crags of Po-Metru nearly to extinction.12, 13

Mutran once mentioned that Muaka were known to torment stone rats.15

On Mata Nui, Muaka lived in caves and were very territorial, willing to attack other Rahi such as Nui-Jaga if they intruded.16