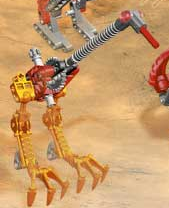 Husi were a breed of ostrich-like bird Rahi. They once roamed free on the rocky crags of Po-Metru before Muaka and other predators hunted them almost to extinction. They were later placed in the Archives for their own protection.1, 2 Some Husi escaped after the Great Cataclysm and later made their way to Mata Nui.1 They lived in Po-Wahi.3