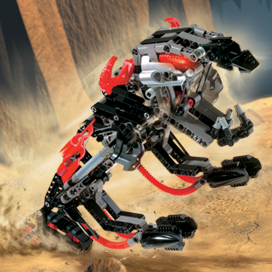 Muaka, with its deadly jaws, and Kane-Ra, with its sharp horns, together were a threat to the inhabitants of Mata Nui.1

The Kane-Ra had red eyes that gleamed with hate. It had hoof-like feet and blew puffs of steam from its nostrils. Twin horns twisted out of the sides of its enormous head. When attacking, it bellowed angrily with deafening volume. It attacked foes by charging at them with its horns lowered.3

The Kane-Ra was a powerful Rahi bull, with long, sharp horns could pierce solid rock with ease.4

Rock raptors preyed on larger Rahi like wandering Kane-Ra by loosing rockslides on them.5, 6 Once stunned, the larger creatures were then easy prey for the raptors.6

There was a legend in Metru Nui about a mutant Kane-Ra which guarded a tunnel network. This story was believed to have been inspired by the Rahi called the Artakha bull.7

A Matoran legend spoke of a tunnel maze guarded by a mutant Kane-Ra, but most believed that to be purely fiction.8

On Metru Nui, Kane-Ra bulls lived in Po-Metru and were one of the largest plant-eating Rahi in the city. Their size and strength were the primary reasons why they survived for so long and in such numbers. Muaka were willing to prey on Kane-Ra, but the Kane-Ra's sharp horns made it a risky creature to challenge. Despite being bull-like, Kane-Ra were not herd animals, and they did not require others of their kind for protection. Moreover, Po-Metru did not have enough vegetation to support large herds. Kane-Ra tended to wander by themselves, or at most with one or two others of their kind. They fed during the day and found shelter in caves at night.8

Under normal circumstances, Kane-Ra were not a threat to Matoran. However, Kane-Ra were extremely territorial, and approaching one too quickly or getting too close would almost certainly prompt an attack. Nui-Jaga often fell victim to Kane-Ra for this reason.8

If faced with a charging Kane-Ra, Rahaga Pouks recommended standing still as opposed to running, since one normally wouldn't be able to outrun a Kane-Ra. By standing perfectly still with arms at one's sides, avoiding direct eye contact with the Kane-Ra, Pouks believed it might break off its charge if it decided one was not a threat, although he warned that this was no guarantee.8

Kane-Ra were one of the largest plant-eating land Rahi. They proved to be a menace on Mata Nui. Several specimens made it from Metru Nui to the island, only to be fitted with infected masks and put under the influence on Makuta. Later, the Toa removed these masks, and the Kane-Ra retreated to the valleys, no longer a threat.9

Kane-Ra could be repelled with the foul-smelling gas emitted by exploding Madu Cabolo.10