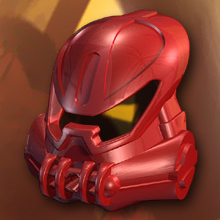 The Kanohi Huna was the Mask of Concealment. The Great Huna could make its user invisible, although he or she would still cast a shadow. The noble version of this mask had the same effect but with a shorter duration.1

The Kanohi Huna was the Noble Mask of Concealment. It allowed its wearer to become invisible.2, 3

The Great Kanohi Huna allowed its user to turn invisible, although the user would still cast a shadow.4

Huna were created from Kanoka disks with the enlarge, shrink, and freeze powers.6

An Elda user could detect a being with an activated Huna.7