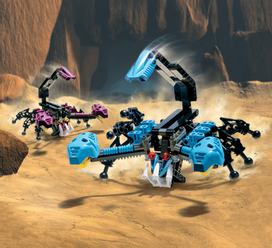 Nui-Jaga were scorpion-like Rahi. They lived in both Po-Metru and Po-Wahi1. They were slow-moving and hunted in packs, relying on numbers and their powerful stingers to bring down prey. On Metru Nui, Nui-Jaga stingers were prized by collectors and were often the subject of highly dangerous hunts. On Mata Nui, Makuta used infected masks to control Nui-Jaga and send them against the Matoran.2

Nui-Jaga were giant scorpion-like creatures with fierce claws and stinging tails, which made them a menace to Mata Nui.3

On Mata Nui, Nui-Jaga were scorpion-like creatures that used their stingers to knock masks off their opponents. They were slow and not very bright. Their region was Po-Wahi.4

The giant, scorpion-like Nui-Jaga liked to feast on bog snakes [Kuna]. The Nui-Jaga was very large, but the bog snakes were small and numerous. When a hungry Nui-Jaga came to a bog snake nest, the bog snakes came in from all directions – behind, up-tree, down-tree – at once. This confused the Nui-Jaga, as there were too many bog snakes for even its stinger to stop.5

According to Tehutti, Nui-Jaga were not Ga-Metru Rahi, and no one from Ga-Metru would even know about them.7

Nui-Jaga were one of the preferred prey of Metru mantises.9

On Metru Nui, Nui-Jaga inhabited the barren wastelands near the Po-Metru Sculpture Fields. Nui-Jaga were scorpion-like creatures. They were notoriously ill-tempered, quick to strike out at intruders or even each other. Nui-Jaga commonly hunted in packs, which made up for the fact that they were not very fast. One Nui-Jaga would drive prey forward, usually into a canyon, where others waited to strike. Once the target was surrounded, the Nui-Jaga would call to each other. Their cries had been compared to the sound of glass breaking. Nui-Jaga stings were painful, sometimes fatal. In some parts of Metru Nui, Nui-Jaga stingers were considered very valuable, so Po-Matoran were known to hunt the creatures. Few hunters, however, ever returned.10

Norik remarked that the only advantage one had when trying to capture Nui-Jaga was that they were not very smart. One effective trick, he claimed, was to place a reflective sheet of crystal along their path. The Nui-Jaga would see its own reflection and strike, thinking it was another of its kind. If it hit hard enough, its stinger would become lodged in the rock, and then it could be handled easily.10