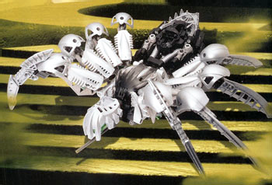 The silver chute spider was a voracious predatory arachnid whose favorite hunting ground was near Metru Nui chutes. Its favorite prey was the Gukko bird, which it would trap using fast-acting paralyzing venom in its webs. Ga-Matoran made a study of this creature's incredibly light and strong webbing in the hopes of duplicating it, without success. Silver chute spiders were the only Rahi not hunted by the Visorak hordes. As a result, many survived to make their way to Le-Wahi on Mata Nui.1

Long before the coming of the Visorak, the silver chute spider was one of the most voracious predators in Metru Nui, inhabiting Le-Metru. These Rahi normally clustered near transport chutes looking for prey. Silver chute spider webbing was incredibly strong and nearly invisible, and it was a constant hazard to Matoran workers. Silver chute spiders favorite prey was flying creatures, especially Gukko. The birds would fly into the spider's web and become ensnared. Fast-acting venom contained in the web paralyzed the prey, at which point there was no hope of escape, unless a passing Matoran spotted the trouble and worked to free the bird before the spider arrived. Ga-Matoran researchers spent many hours studying silver chute spiders, hoping to learn how such a thin and light substance could be so strong. Had they succeeded in unlocking the secret, Matoran would have been able to create ropes and cables thinner than thread and as strong as hardened protodermis. However, Makuta's actions ended their research.2

Norik remarked that out of all the Rahi in Metru Nui, only the silver chute spider seemed to escape the Visorak's notice. He reported seeing hordes sweeping through the Metru, ensnaring every Rahi in sight, while completely ignoring silver chute spiders. He guessed the Visorak might have sensed some sort of kinship with the creatures. He was unsure how long this phenomenon would last.2

Since there were no chutes on Mata Nui, the Matoran there would probably refer to these Rahi as something akin to "silver swamp spiders" because they settled in Le-Wahi.4