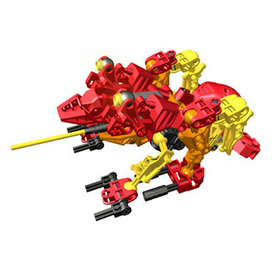 The giant Ranama thrived in the heat of Ta-Wahi, where it swam through the lava flow as if it were water. Lurking beneath the molten surface, a hungry Ranama would wait for an unwary Nui-Rama to fly past, then leap forth with an enormous fiery splash to ensnare the insect with its long and sticky tongue. Most Matoran knew better than to approach the hissing, steaming amphibians, which would eat just about anything they could catch.2

Ranama were giant fire frog Rahi that often made their homes in the molten protodermis that ran through Ta-Metru. They fed on small insects, leaping out of the vats to snare them with their tongue. They were hated by Ta-Matoran because of the need to filter them from the protodermis and because of their habit of attacking anything that came too close.3