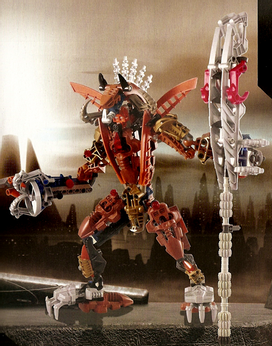 Conjurer was a warrior-king of a southern island who joined the Dark Hunters.3, 4

Conjurer, as he was code-named, was a Dark Hunter who was formerly the warrior-king of a land far to the south of Voya Nui. He gained and held power thanks to sophisticated technology that enabled him to perform feats that seemed almost magical to his Matoran subjects. He relished his power and reign, but he was unable to expand his kingdom because of the extremely limited military power of his Matoran population. When he was presented with the opportunity to add to his power and wealth by becoming a Dark Hunter, he leapt at the chance. As a Dark Hunter, Conjurer maintained his image as a mysterious loner in touch with forces beyond anyone else's understanding, although the Shadowed One knew better. He went out of his way to carry out his missions with a dramatic flair that left witnesses wondering just how he managed to accomplish his great feats. According to the Shadowed One, he schemed to take over the Dark Hunters all the while, unaware that the Shadowed One was far more powerful than he.5

Conjurer had powerful telekinetic abilities and carried a staff of disintegration (although he claimed the power came from himself, not the staff). His Kanoka disks [sic, Rhotuka spinners6] could temporarily steal the power of an opponent and channel it to himself. He had an intense hatred of water, although the Dark Hunters did not know why.5

As of story year 2006, Conjurer was temporarily inactive after attempting to absorb the power of a Brotherhood of Makuta member and overloading his own system. It was uncertain whether he would reawaken.5

Conjurer relied on sophisticated technology to make it appear that he had magical powers. He had powerful telekinetic abilities, a staff of disintegration, and Rhotuka spinners which could temporarily steal the power of an opponent and channel it into himself.3

At the time of the Toa Mahri's mission, he had lapsed into a coma after attempting to absorb the power of a Makuta.3