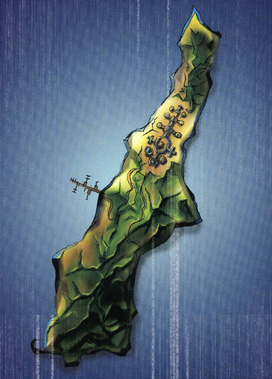 Daxia was the Order of Mata Nui's island headquarters, being its first and largest base. It was mountainous and blazingly hot. At first the place could seem intimidating but could offer great treasures to those who took time to get to know the land. The Order had a fortress on the island defended with cutting-edge weaponry. All Order of Mata Nui members had orders to fall back to Daxia in the event of a major attack.1

Daxia was the homeland of the Order of Mata Nui since the beginning of time in the Matoran universe. It was a paradise, mountainous and beautiful. More importantly, it was easily defensible from behind the walls of the Order's fortress. It was the first and the largest Order base in existence. All Order members and standing orders to fall back to Daxia in case their position was overrun. To outsiders, Daxia might not have seemed an attractive place to settle. It had no obvious sources of water, it was blistering hot year-round, and the wildlife could be quite ferocious. However, the land was rewarding to those who came to know the island well. Tiny streams trickled down from the mountains and turned into underground lakes. The high temperatures produced plant life not found anywhere else in the Matoran universe. The local creatures primarily preyed upon each other, if not on intruders to the island.2

Over the years, the fortress on Daxia was upgraded to feature the very latest technology and weaponry. The Order armed its fortress even though it was confident that no enemy was aware of its location. They had devastating power at their disposal to combat a potential invasion. These weapons were sufficient to destroy the island and everything on it, ensuring that no secrets would be left behind for others to exploit.2

No intelligent beings other than members of the Order lived on Daxia.2

One of the strangest creatures to be found on Daxia was the shallows cat.2

The Order of Mata Nui had a fortress on Daxia. Inside was a great hall. The location of the island of Daxia had always been kept a secret. Daxia had cells for holding prisoners.3

Helryx's fortress on Daxia had a command chamber.3

Daxia was a good place to visit, provided one was a member of the Order of Mata Nui and had been invited. There were places to relax and to train, libraries full of tablets on every imaginable subject, and a central well of energy for when one got hungry. There was also an armory, and equipment storehouse, and a vehicle center that members could access before going on missions.4

Helryx made it clear to Mazeka that return trips to Daxia had to be cleared first, so the Order could make sure he was not being followed to their secret base.4

The Order base on Daxia had guards guarding it. The base had a central corridor. Helryx's chamber was well protected. There were traps and guard stations on the way to it, and the chamber had an escape tunnel built into a wall that led to another part of the base through a hidden exit.4

Daxia was located off the southeastern end of the Southern Continent. Some distance to the south was the beginning of the island chain that ran south down the eastern leg of the Matoran universe, which included Keetongu's island.5

The number of Order of Mata Nui members on Daxia varied based on how many were on assignment.6