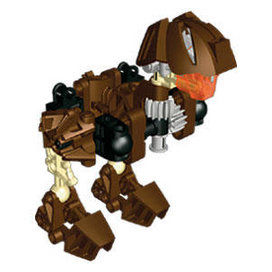 The Dikapi was a breed of flightless bird Rahi known for its ability to run great distances without tiring. They lived on Mata Nui but were never seen on Metru Nui. It was believed they may have arrived on the island from some other underground region.1

The Dikapi was a hardy desert bird with a strong beak and a distinctive flute-like whistle. Although it could not fly, it could run for hours upon end without stopping for food or rest. Some Dikapi were trained by the Matoran of Po-Koro to carry scouts and messengers quickly across the sands.2

Dikapi were flightless desert birds known for their great endurance.3