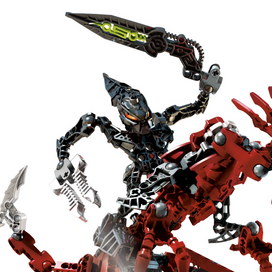 Fero was a bone hunter, one of many who stalked the sands of Bara Magna. Skirmix was his fierce rock steed. Together, they were a fearsome force of the desert. Although Fero was only one bone hunter, he was a good example of the race. To him, what he did was a matter of both survival and sport. He enjoyed pitting his skills against opponents and looked forward to rematches with Glatorian and Agori who had escaped him before. He was a master tactician, perfectly willing to use tricks and ambushes to win. He also understood the need to be at least equal in power to an opposing force, and preferably to outnumber them, before attacking. A lone Agori or Glatorian in the desert was, as far as Fero was concerned, too stupid to be allowed to live – anyone with any sense knew the desert was full of bone hunters just looking for new victims.1

The sands of Bara Magna were home to the fierce bone hunters, and none were more dangerous than Fero. Riding on his rock steed, Skirmix, Fero searched the desert for trade transports he could raid and Glatorian he could capture.2

One of the best known and most dangerous bone hunters was Fero.3

One of Sahmad's most bitter enemies was Fero. Since both he and the bone hunters captured Agori in the desert, Sahmad had had a number of clashes with the roving bandits.4

Fero was confident without being overconfident, experienced, and wise in the ways of the desert and tracking.5