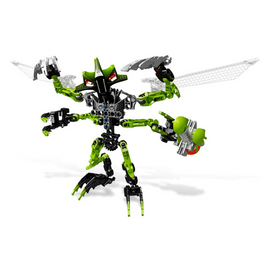 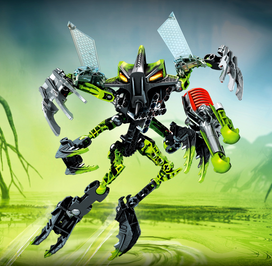 Gorast was a female Makuta. She had a very abrasive personality and had a predilection for gruesome topics.1 Mutran remarked that her usual mood was one of rage and psychosis.2

A savage female warrior, Gorast was ready to give up her life to see the Makuta's plan succeed. Her Kanohi Felnas, the Mask of Disruption, let her make a Toa's powers go wild.4

Gorast once disguised herself as a warrior with ocean blue armor. She carried a chain mace and a shield. She looked powerful enough to down a Takea shark with one blow and was clearly not a Toa.5

On the Tren Krom Peninsula, no one knew what happened to Matoran who wound up in Gorast's clutches, but there were plenty of rumors. Each of them was worse than the last, and some were downright revolting.5

Of all the Makuta, Gorast was the most fiercely loyal to Teridax and his plan. To her, nothing was more important than its success – not her life, not the lives of the other Makuta, not the universe itself. She was truly fearless, and nothing could shake her faith in her leader. Any Makuta who dared to betray the glorious cause for which she fought could expect no mercy. Gorast had purposely chosen one of the most dangerous and difficult areas to rule, the section of the southern [sic, northern] continent that included the fearsome Tren Krom Peninsula. She alone had dared to challenge the acid falls and done battle with the monstrous creations of Tren Krom himself. Gorast demanded total obedience from those in her domain, and there was only one punishment for those who failed to comply: death. As a result, Mutran and Chirox found they could often find volunteers for their experiments from her region, as the inhabitants would do anything to get away from her. This stopped when Gorast destroyed Chirox's lab on Destral and threatened to do the same to him. Trapped in her insectoid form, Gorast had to drain light from other living things in order to survive. While she could feed off the light of swamp Rahi, the meals were too small to sustain her for long. Because of this, she targeted the Toa, either by direct attack or by trying to lure them into her clutches. Gorast had four arms ending in claws and carried a Nynrah ghost blaster. She wore the Kanohi Felnas, the Mask of Distruption, which could make the powers of others run wild.6

The effects of the Karda Nui swamp waters changed Gorast so that it became necessary for her to breathe.7

Gorast did not have a Toa Hagah team.9