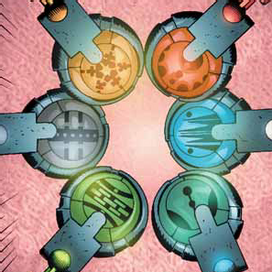 The Great Disks were six Kanoka disks of great power which, according to legend, were each hidden in one of the six Metru of Metru Nui. Their powers were reconstitutes at random, freeze, weaken, enlarge, regenerate, and teleport.1 They were the only Kanoka disks ever known to have a power level of 9.1, 2, 3

The six Great Disks were known in legend. They were supposedly the most powerful Kanoka disks in Metru Nui and would have been considered beyond price. Tales of the Great Disks were common knowledge in Metru Nui. It was said they contained enormous power, but the only clue to their location was that one was hidden in each metru. Nokama saw a carving in the Great Temple that said something about finding the Great Disks by seeking the unfamiliar within the familiar. The rest of the carving seemed to be riddles.4

The codes of the Great Disks were:5

A series of clues to the locations of the Great Disks were carved on the wall of the Great Temple. According to the inscription, finding the Ta-Metru disk required "embracing the root of fire," which Vakama and Nuhrii understood to be a reference to the fire pits.6

The carving advised that "no door must be left unopened" to find the Great Disk in Onu-Metru.6

The carving said "In Ga-Metru, go beyond the depths of Toa before."6

The carving said "The Great Disk of Le-Metru will be all around you when you find it."6

The carving, as translated by Nokama, said "In Ko-Metru, find where the sky and ice are joined."6

Nokama said that the Toa must seek a "mountain in balance" if they were to find the Po-Metru Great Disk.6

Only Great Disks possessed enough raw energy to have a power level of 9.6 Level 9 was the highest known concentration of energy possible in a Kanoka disk.6

The Ta-Metru Great Disk was somehow able to withstand the intense heat of the fire pit in which it was hidden.6

The Great Disks were said to be the most powerful items in all of Metru Nui.7

When the Toa Metru activated the Great Disks, pure power flashed from the disks, blindingly bright bands of energy that twisted around each other. Lightning flashed wherever two bands touched, striking at the vines that reached for the Toa. Then the energies blended together, forming a sphere in mid-air that moved slowly and inexorably toward the Morbuzakh. It encompassed the king root, severing the branches and roots that had anchored it to the Great Furnace. Then the sphere suddenly disappeared.6

According to ancient legend, one Great Disk was hidden in each metru of Metru Nui.8

Deep in the Great Temple, an ancient carving on a wall contained clues to the locations of the six Great Disks. It said:8

"The Great Disks will be found by seeking the unfamiliar within the familiar. In Po-Metru, you must seek a mountain in balance. In Ko-Metru, find where the sky and ice are joined. The Great Disk of Le-Metru will be all around you when you find it. No door must be left unopened in Onu-Metru. In Ga-Metru, go beyond the depths of any Toa before. Embrace the root of fire in Ta-Metru. And these glorious disks will be yours."8

Everyone knew the legend of the Great Disks: six powerful Kanoka disks, one in each metru.9

The Ta-Metru Great Disk had the code 159. Only a Great Disk contained so much energy as to have a power level of 9.10

The Great Disks were created on Artakha.11