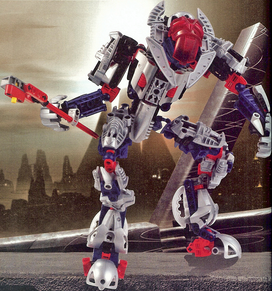 Guardian was a Dark Hunter1 tasked with eliminating any captured Dark Hunter agents before they could leak information. His Rhotuka spinners contained powers tied to stone and earth.2

Guardian, as he was code-named, ensured that captured Dark Hunters did not divulge information to their enemies. He stayed on the periphery of any major conflict between the Dark Hunters and major foes like the Toa or the Brotherhood of Makuta. His job was to silence any Dark Hunter which might be captured.3

Guardian originally came from an island wracked by war. His tribe was betrayed by one of their own and delivered into the hands of their enemies. He was injured in a Rhotuka crossfire and left for dead. A Dark Hunter stumbled upon him and, seeing a potential ally, restored him to health. Once on Odina, he was outfitted with new weapons and given a new purpose. As one who was betrayed by a comrade, Guardian would ensure that no Dark Hunter would ever get the chance to commit such treachery. He was fueled by rage and a desire for revenge. He proved to be ruthlessly effective at silencing possible defectors.3

Guardian's right arm was rebuilt to allow him to wield a staff that launched Rhotuka spinners. His spinners contained powers tied to stone and earth. For close-quarters fighting, his claws were more than sufficient.3

Guardian was kept extremely busy during the Dark Hunter-Brotherhood of Makuta war.3