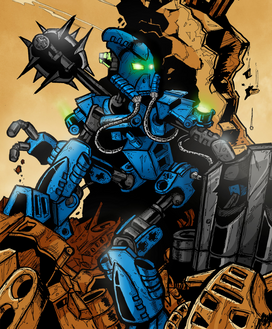 In her time as leader of the Order of Mata Nui, Toa Helryx had needed to make difficult decisions, something she had always known. She had sent agents on missions she knew they might well not come back from. She ordered the deaths of everyone who knew the location of Artakha.1

Using her Mask of Power, Helryx could read the past of an object simply by touching it.1 See Mask of Psychometry.

Helryx spent many thousands of years honing her control over water to perfection.1

Toa Helryx carried a spiked mace and a shield.2 She was the leader of the Order of Mata Nui.2, 3

Helryx was not a member of the Cordak or a team before them.8

The first Toa had no team.9

The first Toa was a female Toa of Water.10