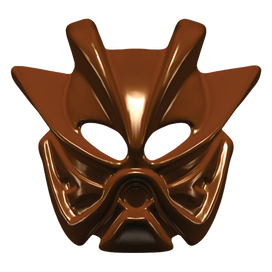 The Kanohi Kakama Nuva was a more powerful version of the Kanohi Kakama. It not only allowed super speed travel but also gave the user complete control over the molecules in one's body. This allowed someone wearing a Kakama to pass through solid objects without harm simply by vibrating at a different speed than the object. As with all Kanohi Nuva, the user could share its power with others in close proximity.1

The Great Mask of Speed. It allowed the user and those nearby to move at great speed and pass through solid objects without harm.2

The Kanohi Kakama Nuva was the Great Mask of Speed. It allowed its user to move at great speed and pass through solid objects without harm.3

Pohatu Nuva's new mask provided him with even greater powers of speed.4

Pohatu Nuva once used the mask in a blizzard to blow snow away by spinning his arms in front of him rapidly until they sent out two blasts of air.5

Gali Nuva once used the mask underwater to create a strong current by kicking her legs.5

Like the Great Kanohi Kamama, the Kakama Nuva made the user's reflexes lightning quick, making it possible for one to maneuver at high speed. It made one's vision sharper, allowing one to see objects that would otherwise have been just a blur. Additionally, one could use it to make one's body vibrate, making every atom move until it was nothing but a blur. This allowed one to pass through solid objects unharmed.5

If a being shared his or her Kakama Nuva with another being and they ran in different directions, the second being would continue to enjoy speed powers until he or she left the radius of effect for the shared power.6

The Kakama Nuva could be used to run in the air or up a large object.7

Is someone used a Kakama Nuva to vibrate and allow a Kanoka to pass through one's body, the Kanoka would have no effect.8