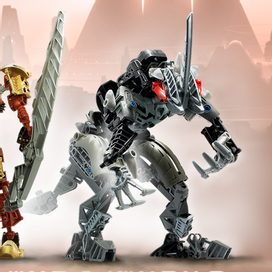 Kikanalo were herd beast Rahi that roamed the canyons of Po-Metru before coming to Mata Nui. They used their horns to dig up little bits of protodermis left behind by Po-Matoran carvers. They had great strength and could let loose a roar that could blow away enemies like dust in a windstorm. They were in fact quite intelligent.1

Kikanalo were massive creatures resembling a cross between a kangaroo and an elephant. Great herds of Kikanalo swept across the plains and canyons of Po-Metru every day. Using their sharp tusks, they churned up the rocky ground, dislodging bits of protodermis that were lost during the carvers' labors. These scraps could later be collected by Po-Matoran and recycled for later use. The valuable service the Kikanalo provided explained why the Matoran ignored how often the beasts trampled entire villages in their wild stampedes.2

Kikanalo were fearsome beasts. They were large bipeds, and their powerful hind legs propelled them forward in huge leaps and bounds. Twin tusks on their lower jaws made a stampeding herd look like a spiked wall on the march. Their eyes burned red, and deep roars came from their mouths as they stormed by. In Po-Metru, Kikanalo were known for their stampedes, but they were tolerated because their tusks often dug up chunks of protodermis left over from carving projects. However, a Kikanalo stampede was extremely hazardous.3

The Toa Metru encountered a herd of Kikanalo led by an aged Kikanalo covered with strange markings and old scars. The leader was able to bring a stampede to a stop "like a well-drilled Vahki squad." Kikanalo communicated in a language of grunts, which Nokama was able to speak and understand using her mask power. Previously, Matau had had no idea that Kikanalo could think and speak. The chief Kikanalo seemed to be able to understand what Matau said in Matoran.3

The Kikanalo's knowledge of the terrain of Po-Metru and its greater agility allowed it to outdistance a Zadakh. Kikanalo had powerful legs and could slam into Vahki and send them flying. A group of Kikanalo could let out a long, low cry in a chorus. The strange sound could grow so loud that it would disturb the rocky ground, creating a wave that could sweep into a foe and send it flying. Kikanalo could also jump very high into the air.3

Massive herd beasts from Po-Metru, the Kikanalo used their horns to dig up the ground, in the process dislodging bits of protodermis lost by the Matoran carvers. Even Dark Hunters feared stampeding Kikanalo, who were known to crush entire assemblers' villages flat in a matter of minutes.4

The savage catapult scorpions were hostile to almost anything that moved except for Kikanalo. Catapult scorpions preferred to scavenge edible solid protodermis by following behind Kikanalo herds and consuming whatever their horns dug up.7

The Kikanalo herds waned during the Visorak invasion.7

Kikanalo were massive herd Rahi that lived in the canyons of Po-Metru. Using their mighty horn, they churned up the rocky ground, dislodging bits of protodermis lost during the carvers' labors. This in itself was a positive thing, since Po-Matoran could re-use the scraps the Kikanalo found. However, Kikanalo were known to trample entire villages in the process.8

Kikanalo were long dismissed as dumb beasts. However, Toa Nokama later discovered that they were unusually intelligent. Kikanalo were able to defend themselves in a number of ways. They were famous for their stampedes. They would commonly stampede over foes or jump high into the air and land on top of them. If pressed, Kikanalo could unleash a roar so powerful that it would blow enemies away.8

During the Visorak invasion in Metru Nui, some Kikanalo still remained on the northern plains of Po-Metru, but their numbers were decreasing as the Visorak took a stranglehold on the city. The Kikanalo were too proud to hide and tried to challenge the Visorak head-on, losing more often than not. The Visorak threatened to hunt the Kikanalo to extinction. Rahaga Pouks did what he could to save the beasts, wishing that he had Nokama's Mask of Translation to communicate with them, although he doubted they would listen. He remarked that the Visorak had the advantage in numbers, and that in another two or three months, the Kikanalo would be wiped out.8

Sand Tarakava were a natural enemy of the Kikanalo9, usually preying on the weak or injured in a herd.10

Kikanalo did not eat the protodermis they dug up.11

Kikanalo were not as strong as Manas.12