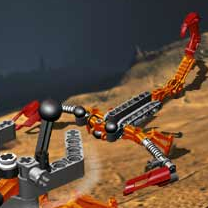 Kofo-Jaga were small, fiery scorpion Rahi known for attacking in swarms.1 They were most often found near abandoned forges in Ta-Metru1, 2 and near the Mangai volcano in Ta-Wahi.2 They were attracted to the smell of molten protodermis and preferred dark places. Matoran in Ta-Metru investigating empty factories knew to carry bright lightstones to protect themselves temporarily from Kofo-Jaga.1, 2

Kofo-Jaga were also known as fire-scorpions. Alone, they were no threat; but in a swarm, Kofo-Jaga could bring down a creature many times their size. They thrived on heat and flame. Although they plagued Onu-Wahi, many believed they were native to the lava pits of Ta-Koro. They certainly followed the scent of molten magma wherever it led. Whenua claimed that fire-scorpions once felled a full-grown Kane-Ra, an incident which the beast would later remember with pain. Kofo-Jaga were attracted by the heat and scent of lava. They were easily able to withstand lava. They had fiery stingers.3