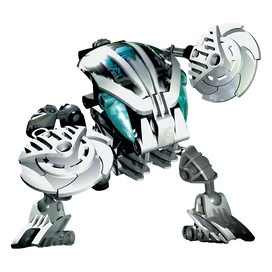 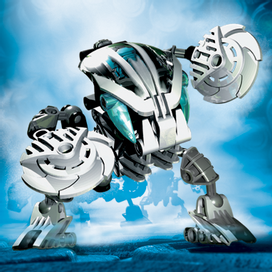 Kohrak were one of the six Bohrok breeds, tied to the element of ice. Their ice shields could freeze anything, even open flames. The Kohrak's bodies gave off such intense cold that other Bohrok avoided their company. They spent much of their time on the lava plains and in the valleys of Ta-Wahi.1

Like the ice they could create, Kohrak were cold and hard. Totally focused on their mission, it was almost impossible to distract a Kohrak from what it was doing. They were most often spotted in valleys, lava plains, and open land.3

The Kohrak could freeze even molten lava.4

The Kohrak's color was silver, and their element was ice. They were the first Bohrok encountered by the Toa. They used ice shields that could freeze anything, even molten rock or open flames. They radiated such intense cold from their bodies that other Bohrok avoided them.5

Kohrak were the Bohrok of Ice. Their shields could freeze anything, even open flame. The intense cold given off by their bodies kept even other Bohrok away from them.6