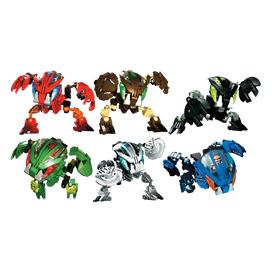 The Bohrok were aided by the Bohrok Va. The Bohrok traveled in squads of eight, with their roles in the squad dictated by the unique krana they carried.1

The krana were living creatures who dwelled inside the faceplates of the Bohrok. The krana were the true power of the Bohrok swarms; it was from a krana that an individual Bohrok get its role in the swarm, as well as a special power.2

The Bohrok did not truly live. They were artificial life, biomechanical creations.3

For years, the Bohrok's names were spoken only in whispers on Mata Nui: Lehvak, whose acid mist could dissolve anything; Gahlok, who brought the flood tide; Tahnok, whose heat could melt rock; Kohrak, who could freeze lava; Pahrak, who could crumble mountains; and Nuhvok, who dwelled in underground tunnels. Krana were strange and powerful creatures who controlled the Bohrok.4

When the Toa defeated the Rahi, Makuta unleashed a new menace: the Bohrok. Swarms of these insect-like creatures swept over the island of Mata Nui, bringing chaos wherever they went. Like the Toa, they drew their powers from the elements. They used their powers to crumble mountains, level jungles, and turn rivers to dust. Along with their smaller helpers, the Bohrok Va, they were a menace beyond anything the Toa had ever known.5

Bohrok did not think on their own; they were like empty vehicles which held little brains called krana, which received orders from Cahdok and Gahdok. When a krana was removed from a Bohrok, that Bohrok ceased to function properly and could be tamed. Bohrok were especially dangerous because they could eject their krana onto the face of an opponent, which would then take control and link the opponent to the rest of the Bohrok swarm.6

The people of Mata Nui (at least Turaga Vakama) knew the legends of the Bohrok for centuries, although they prayed they were only legends. It was said the Bohrok slept an eternal sleep, waiting to hatch. Once awakened, the swarms were unstoppable – a force so powerful that they could reduce mountains to rubble and turn rivers dry.7, 8 They were assisted by Bohrok Va – smaller, quicker creatures that acted as scouts and couriers.8 Each Bohrok carried a krana within it. The krana looked like a mask. The krana gave its Bohrok purpose and power, but it was also its greatest weakness, as any Bohrok could be humbled if parted from its krana.7, 8 The legends did not say whether the krana came from Makuta. There were different swarms of Bohrok.8

The Bohrok seemed willing to leave nothing untouched on Mata Nui, from the trees to the rivers to the very land itself.8

In Metru Nui, Onu-Matoran miners discovered Bohrok when they stumbled upon what seemed to be a nest of insect-like creatures some time before story year 2004. As of story year 2004, they were on display in the public levels, while the organic creatures called krana which were also found in the nest were held in the lower levels.10

Each Bohrok was controlled by a Krana contained inside of it which provided additional power. Bohrok could launch their Krana at a foe, which if stuck to its face like a mask would cause the target to become mentally enthralled by the swarm. The Krana in turn were in mental contact with the Bahrag, who ultimately provided direction to the Bohrok swarms.11

The six Bohrok breeds had elemental powers similar to those of Toa, controlling fire, stone, earth, ice, and water. The Lehvak were associated with swamp terrain instead of the air element. Each breed carried two shields through which they could focus their elemental powers.11

Each breed employed different preferred tactics in battle, although individual Bohrok had no recognizable personalities.11

Bohrok could also snap their heads forward to deliver a powerful blow.11

The myriad tunnels which led from Metru Nui up to the island of Mata Nui were originally built so the Bohrok could access Mata Nui. The Bohrok rested in nests beneath Mata Nui and Metru Nui, awaiting a signal to awaken. When they received it, they would proceed to Mata Nui to cleanse it of all rocks, trees, rivers, etc. and reduce it again to the barren place it once was.12

The Bohrok could be awakened using a sonic signal. There were not a large number of Bohrok in Metru Nui – only the specimens kept in the Archives and in the small nest below it. When these Bohrok were awakened, all they wanted was to reach the island of Mata Nui. The only reason they fought with the Rahkshi on their way out was because the Rahkshi were in their way.13

The Bohrok were creations of the Great Beings whose mission was to scour clean the island of Mata Nui. Not even Makuta Teridax understood the purpose of their mission when he unleashed them on Mata Nui.14

Bohrok were insect-like mechanical beings controlled by small, organic creatures called krana. They slept in nests that extended far below the island of Mata Nui, waiting for the signal to hatch. Their mission was to "clean" Mata Nui until it was returned to the barren rock that it once was. The Bohrok were ruled by two swarm queens, the Bahrag, and assisted by small robots called Bohrok Va. It was later discovered that many Av-Matoran, Matoran of Light, evolve into Bohrok at a certain point in their lives, changing from biomechanical beings to completely mechanical ones and losing their individual wills. There were six types of Bohrok: Tahnok, Gahlok, Lehvak, Pahrak, Kohrak, and Nuhvok.15

The signal that awakened the Bohrok would have been sent automatically when the proper time came. No individual was tasked with sending the signal, but the signal could be faked.16

When Mata Nui landed on a planet for the purposes of observation, his system created a disguise for his face by creating a rocky surface and then growing plants that looked like the local flora. When it was time for him to leave, the Bohrok cleaned all that plant life off and weakened the surface so it could be cracked open when Mata Nui rose.17

The Bohrok were not transformed back into Av-Matoran when Mata Nui restored Spherus Magna. The Bohrok still had a purpose – entire cities needed to be built on Spherus Magna, and the Bohrok made great laborers. They would have had little reason not to do this, since their original purpose no longer existed.18

The secret of the Bohrok was that they came from Mata Nui, were a part of it, had a role to play, and may have even been somehow related to the Toa.19

The Bohrok's elemental powers were tied to their bodies, not the krana.21 Bohrok were not powered by their krana, merely directed by them. Without them, they could continue to function but were aimless.22

The Bohrok's mission involved only the island of Mata Nui.23

The Order of Mata Nui had no direct connection to the Bohrok, although both were in service of Mata Nui.24

Thousands of Bohrok were created.25

It's possible the Bohrok were not always inorganic.26

Bohrok couldn't carry out their mission without krana, but they could still operate. Without krana they were less efficient and somewhat aimless.27

When the Bahrag stated the Toa and Bohrok were brothers, they were specifically referring to the Toa Mata.28

At least the Bahrag considered the Bohrok and Toa Mata to be brothers because they both carry out the will of Mata Nui, though in different ways. The Toa defend the Matoran, and the Bohrok ensure the island of Mata Nui remains barren.29

The Bohrok were designed to cleanse the island of Mata Nui because it was forseen that one day it might not be barren.30

The Bohrok were intended to level the island when it is uninhabited so nobody was harmed.31

The mechanical version of the Bohrok, after their evolution from more organic forms, were always intended to hold krana.32

The only island that needed to be cleansed by the Bohrok was Mata Nui.33

The vast majority of Bohrok were under Mata Nui or Metru Nui.34

The Bohrok were essentially like automatic cleaners. Unless they were working, they had no need to live anywhere, so they stayed in their nests until needed.35

Real Bohrok were present in locations besides Metru Nui and Mata Nui.37

The Bohrok far from Mata Nui were still controlled by the Bahrag.38

The Bohrok could repeat their mission more than once if necessary.39

A Bohrok's squad would not necessarily try to retrieve a krana lost by one of the squad members, instead waiting for Bohrok Va to bring a replacement.41

Bohrok had elemental powers, but not elemental energy as Toa did.42

The Bahrag considered the Bohrok to be the Toa Mata's brothers.43 They believed this in part because both groups fulfilled Mata Nui's will.44

After completing their task, Bohrok went back to sleep in their canisters.45

When the Bohrok finished their task, the island was left barren.46