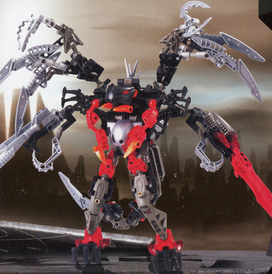 Kraata-Kal was a Dark Hunter1 who began life as a Kraata before being mutated by Makuta into an armored form. He had power over water, fire, and shadow and carried a double-bladed flame sword and a Kanoka disk launcher.2

Makuta created Kraata-Kal by exposing a kraata to a mixture of the same energies used to mutate Bohrok into Bohrok-Kal. The result was a vastly intelligent and powerful serpent with control over fire, water, and shadow. Makuta constructed a suit of armor far more powerful than that of a Rahkshi to house this new creation. The armor itself was an offensive weapon, fitted with claws and teeth to ward off attackers. As a Dark Hunter, Kraata-Kal also carried a double-bladed flame sword and a Kanoka disk launcher.3

As a Dark Hunter, Kraata-Kal was extremely ambitious and on more than one occasion ignored his mission objectives in the interest of his own profit.3

Kraata-Kal was a unique being.4