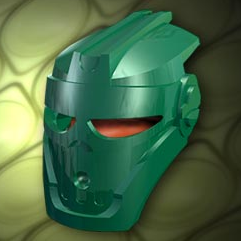 The Kanohi Mahiki was the Mask of Illusion. The Great Mahiki allowed its user to shape-shift. The Noble Mahiki simply created illusions to confound enemies.1

The Mahiki was the Noble Mask of Illusion. It allowed the user to create illusions to deceive an opponent or escape detection.2

The Kanohi Mahiki was the Noble Mask of Illusion. It allowed its wearer to deceive an enemy by creating illusions.3

The Great Mahiki allowed its user to shapeshift and take on the appearance and voice of anyone he chose.4

The great Mahiki granted its user the power of shapeshifting. It allowed Matau take the forms of Nidhiki, Krekka, and a Vahki.5

Mahiki were created from Kanoka disks with the reconstitutes at random and weaken powers.6

The Great Mahiki could be used for shapeshifting rather than simply casting illusions like the Noble version.7

When the Mahiki was used to shapeshift, the user did not gain the powers of the being he or she shapeshifted into.8