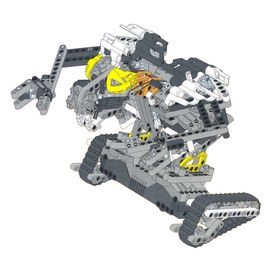 Mana Ko were fierce Rahi used by Makuta to guard his Mangaia lair. They were large, blocky-looking Rahi with the power to fire explosive blasts at opponents (or virtually anything else that attracted their attention). Although believed by the Toa and Matoran to be evil creatures, the Mana Ko were in fact loyal to the Order of Mata Nui and were expected to oppose the Brotherhood of Makuta should a final battle arise.1

The Mana Ko was a massive Rahi. It had eyes perched high in a red and yellow head. Its body was rectangular and blocky in shape, with two powerful arms and thick legs that ended in a solid band of armor. At both ends of the band were rolling treads. The Brotherhood of Makuta used Manas as guardians, but they always said they were just a sample – that the real power was the Mana Ko. They were able to fire devastating blasts of energy that could disintegrate huge stone structures. The Mana Ko that chased the Piraka out of Makuta's lair stopped short when the Piraka started ascending to the surface of Mata Nui. Zaktan supposed that Makuta had given them orders not to come to the surface, so that they would not kill the Matoran whom Makuta intended to rule.2

The Mana Ko were fierce, monstrous beasts. In Matoran legend, they were known as the ultimate guardian of Makuta's lair beneath Mata Nui. Their bodies were rectangular and blocky, with eyes perched high in a red and yellow head. Mana Ko were able to fire explosive blasts of devastating power, which they eagerly used against anything that moved.3

Mana Ko were not native to Voya Nui.4

Mana Ko were not Manas Kaita.5

They are referred to as "Mana Ko" (no hyphen) in Legacy of Evil.2