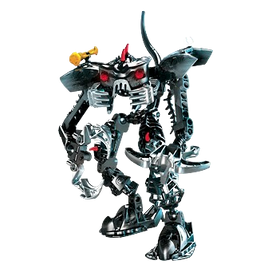 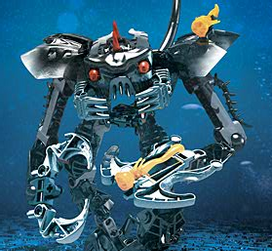 Mantax was one of the six Barraki which menaced Mahri Nui. He had a loner attitude. When buried in sand, only his eyes and head spikes were visible. These spikes were coated with a paralyzing venom. His right hand was a massive pincer, and in his left he held a squid launcher. The tail-like tentacle on his back was a lightning conductor, and he had thick, armored shoulder plates to protect his body. He rarely spoke but was an excellent listener, which added to his effectiveness as a hunter.2

Mantax was a dweller in darkness. He was the most secretive and mysterious of the Barraki. He spent most of his time buried in the sea floor, with only his eyes and head spikes visible, waiting for prey to swim by. When he was not there, he was down in the flooded remains of the original Pit, for reasons unknown. He traditionally kept silent and in the shadows, preferring not to share information with the other Barraki unless he had to (knowledge was power, after all). He commanded an army of rays. His natural tools were a pincer; head spikes which produced a paralyzing venom; a tentacle on the back of his head which acted as a lightning conductor; and thick, armored shoulder plates. His weapon was a squid launcher. He had no powers.3

The most mysterious of all the Barraki, none of Mantax's allies knew just what he was thinking or planning. Half-hidden on the sea floor, waiting patiently for prey to swim by, he was as silent as the shadows he dwelled within. His weapon was a squid launcher and his natural tools were pincers and head spikes.1

Mantax claimed to have no friends, only enemies he had not killed yet. He was convinced that the Barraki rebellion had failed because one of their number had betrayed them, which he spent years after their escape from jail trying to prove. Mantax carried a squid launcher, and his head spikes were coated with a paralyzing venom. He led a large army of manta rays.4

Mantax's lightning conductor tentacle basically worked like a lightning rod. It caught lightning and redirected it so it didn't harm him.5

Mantax was most likely able to detect electrical fields.6

The tentacle Mantax used as an electrical conductor was the one on his back, not the ones on his head.7

Mantax couldn't harness the electricity conducted by his tentacle, it simply protected him from electrical attack.8

“And I thought you did,” said the Toa of Water. “While we’re fighting, whoever does will be escaping with it.”

Mantax regarded her coldly. As a rule, he had no use for Toa -- too conscience-bound to be ruthless, and always so quick to oppose the plans of their betters. But one thing about them he believed to be true: Toa were not liars. And if this water Toa was telling the truth …

“I have no friends,” said Mantax. “Only enemies I haven’t killed yet.”3