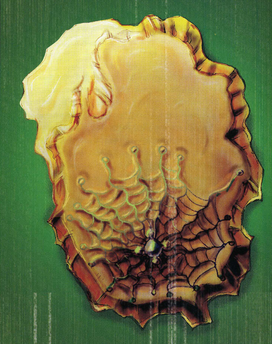 The island of Odina was the home base of the Dark Hunters.1, 2

The Shadowed One's fortress had a stone courtyard.3

According to Nidhiki, the island was heavily defended, home to several hundred killers, and unfailingly lethal to outsiders.3

The island's dock was located at [Nidhiki Beach].3

Many sentries, including Airwatcher, protected the island.4

Many dungeons were located beneath the Shadowed One's fortress.5

The Shadowed One's throne was in a large stone chamber. Although a fire raged in a fireplace, the room was icy cold. The walls were decorated with Kanohi masks, some of them badly damaged. Most striking was what appeared to be a stasis tube in one corner with a Toa inside, trapped in suspended animation.6

There was a terrace overlooking a training arena. Down below, Dark Hunters of various specious could be seen engaging in mock combat to hone their skills. New Dark Hunters spent the night in a rough barracks with a few dozen others.6

At any given time, anywhere from fifty to a hundred Dark Hunters were stationed on Odina.6

During Zaktan's rebellion, only a few guards were on duty at the fortress gates, led by Prototype. Dank corridors led to the central chamber where the Shadowed One stayed. The corridors of the fortress could be changed at a moment's notice, which was useful for confounding intruders. The Dark Hunter Darkness usually stayed up among the stone beams of the ceiling above the Shadowed One's throne.6

The island had cold, snowcapped peaks.6

For Dark Hunters, leaving the island without authorization was punishable by death.6

Odina was the island headquarters of the dangerous Dark Hunter organization. Odina's location was kept secret from the outside world. Although the Shadowed One believed Odina remained concealed, the Order of Mata Nui knew its location for centuries. The Order highly discouraged traveling to Odina.7

Odina was an ideal choice for a secret base. It was located well away from any normal trade routes. Its high cliffs made it extremely defensible. With so few neighboring islands, no one ever saw or heard the island's activities. Odina was heavily defended. Odina was most remarkable for its cliffs, which rose hundreds of feet in the air on every side of the island. These huge monoliths of black stone that cut the island's interior off from the outside world. Only one pathway led from the upper plateau down to the coast, emerging at a spot named Nidhiki Beach. The only other significant features were the Dark Hunter fortress and training ground. The fortress covered most of the southern half of the island. It was built to be impregnable, and where even the Brotherhood of Makuta's strongholds were invaded and robbed on occasion, this never happened on Odina. The stone of the fortress's inner hallways had unusual properties: the building's entire configuration could apparently be changed by the Shadowed One's thoughts, allowing him to herd intruders wherever he pleased. The structure was also loaded with traps, dead ends, and prisons. The courtyard of the fortress served as a training area for Dark Hunters. On Odina, there was no mock combat — all fights, even training exercises, were to the death, unless the Shadowed One wished otherwise. At any time of day or night, boats or airships went in and out of Odina, ferrying agents to and from their missions.7

The only time Odina's security was truly at risk was after the Dark Hunter's defeat in the Toa-Dark Hunter War. Instead of prying Odina's location from their Dark Hunter prisoners, the Toa allowed them to return to their base in exchange for the Makoki stone.7

Because of the nature of the Dark Hunter organization, the population of Odina was extremely varied, coming from many different species.7

The cliff screecher was one of the few native species to survive Odina's occupation by the Dark Hunters.7

Odina was located well away from any trade routes, and its steep cliffs made it highly defensible. Its northern reaches were wild and barren. The main feature of its southern side was the fortress of the Shadowed One. It was here that Dark Hunters were trained, housed, and given their missions. Another notable feature was Nidhiki Beach, named after the former Toa who was mutated by Roodaka there. Odina was heavily defended and home to vicious Rahi like the cliff screecher.2

The mountainous northern regions of Odina were patrolled by Airwatcher.8

Odina was heavily defended and notoriously difficult to invade. The northern region held mountains which were difficult to pass; fewer guards were posted here because of the natural barrier. South of this was the island's fortress.1

Odina was located in the eastern arm of the Matoran universe. It was the third in a chain of islands running from north to south, Nynrah being the fifth, and Visorak being the sixth and final.10

Odina was very rocky and stormy.11

The Dark Hunter fortress probably had safeguards to prevent someone from entering through a dimensional gate.12