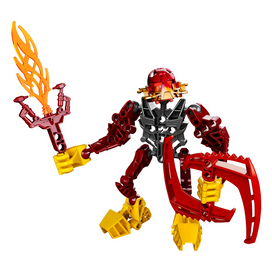 Raanu was the leader of the village of Vulcanus as well as the chairman of the Council of Elders. The chairmanship was a position of great power, and Raanu was the first modern Vulcanus elder to hold the title. Prior to the Shattering, Raanu was employed in the fortress of the Element Lord of Fire. As a leader, Raanu was fiercely devoted to the welfare of his people. This often put him in a difficult position, torn between wanting to fight to protect Vulcanus and wanting to keep his Agori safe. Raanu's relationship with the Glatorian was a conflicted one. Although he understood their importance and respected their skill, he also remembered the damage they did in the war. If they were not needed for a match, he preferred they not be in the village, particularly if they were not Fire Glatorian. Deep in his heart, Raanu feared the Glatorian. He knew that at any time they could storm the villages, take what they wanted, and kill any Agori who got in their way. It was precisely for this reason that he encouraged Agori like Crotesius to master vehicle combat, so there would be some defense against Glatorian if one was ever needed.2

Leader of the fire tribe of Vulcanus, Raanu was quick and strong. The most important things to him were his village and his people, and he would do anything to keep them safe.3

Raanu was of the Fire Tribe and was located in Vulcanus. His equipment was a fire blade and a shield.1

Raanu was the leader of the village of Vulcanus and, as of the end of story year 2009, was now the chairman of the Council of Elders, the governing body of the newly unified Agori city.1

As the leader of Vulcanus, Raanu was fiercely devoted to the welfare of his people. His experiences in the war led him to not trust the Glatorian very much, since he remembered what armies of them had done long ago. Deep down, Raanu was always worried that Glatorian might join forces and decide to take over the villages.1

Very responsible and proud, Raanu could also be stubborn and a little unreasonable at times.1

As elder of the village of Vulcanus, Raanu's days were filled with hard work, whether it was with the other Agori, or keeping an eye on the fighting skills of Ackar, the village's lone Glatorian. But when the work was done, and things were quiet, Raanu thought of life before the Core War and the Shattering, his "home." He never forgot the sounds of the sea or the trees that stretched up to the sky, although he was sure those things were gone for good. Like everyone else on Bara Magna, he was simply too busy surviving to have time for hope.4